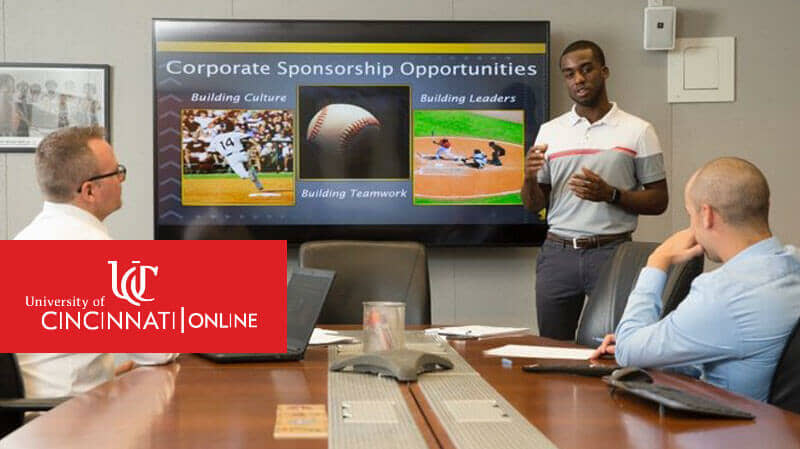 If you ever wondered what it’s like to work as an athletic director at a high school in a major metropolitan area, you may be surprised to know the job is more diverse than what you would expect.

Alex Mallue, a 2018 graduate of the University of Cincinnati’s Master of Science in Sport Administration, is the athletic director for Riverview East Academy, a  pre-K through 12 Cincinnati public school. Previously, he was the assistant director of athletics for another area school, Western Hills High School.

As Riverview’s 7th through 12th-grade athletic director, his work includes a mix of responsibilities that keeps him active from early mornings and through the evening on many nights. “No two days are ever the same,” he says. Alex compares the athletic director’s role to a principal’s — but for the school’s athletics program.

“My mornings often start out the same,” says Alex, “with me in the gym where our kids are playing and talking before school begins. I walk around and get the vibe on how everyone is doing.”

Alex’s morning includes time spent with the principal helping with morning announcements, where he covers athletic news for the school. Next, he spends time doing office work, answering emails and phone calls and working on special projects. He’ll often meet with Riverview’s gym teacher and other school faculty and attends leadership meetings with other department heads and administrators each month.

On home-game days, Alex spends a lot of time in the gym or on the field in preparation for a volleyball match or other sport. If it’s an away-game day, Alex’s responsibilities include logistics and and making sure students travel safely to and from the game. “School ends at 3:55 p.m.,” says Alex. “Some of our games begin at 4:30 p.m. or later, and I’m typically at every home and away game.”

Alex says that when he explains his job to people, a lot of them are surprised at the variety of work, which includes making sure the school’s athletic practices comply with state, national and league rules. Alex is also involved with coaching, even though it’s not the typical role. “Our coaches coach our student-athletes. But who coaches the coaches? That’s part of what I do in my role, supporting Riverview’s coaches.”

In addition to his work at the school, Alex is the school’s community coordinator. He and the principal attend local council and other meetings in the Columbia-Tusculum community.

“Developing a community feel around our school is important,” says Alex, “because we’re open enrollment. It can be tougher to develop that local connection when students from all over the Cincinnati metro can attend Riverview.”

Alex enjoys developing relationships with the business owners and residents who live near the school. He says that even if he didn’t have a community liaison role, he would still be involved in this work. The connections he makes are lasting and the community’s fund-raising events, including a big, annual street fest, give the school thousands of dollars they wouldn’t have otherwise. 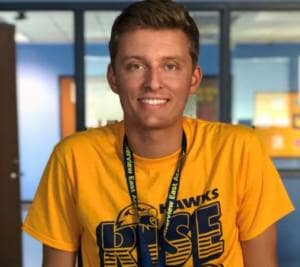 Alex is a graduate of Seton Hall University in New Jersey with a bachelor’s degree in both sport management and marketing.

When it came time to choose where to study for his master’s, Alex knew he wanted to get back to Ohio to be with friends and family. He says that his career goal of becoming a high school athletic director (AD) kept his focus on advanced sport administration studies.

“There are typically two routes to becoming an AD,” says Alex. “Some people start out teaching and coaching and then move into the role. Others get their master’s degree and attack it that way. I knew, going in, that I would need to get my master’s first.”

Alex began his University of Cincinnati studies in August 2017 and graduated with a master’s degree a year later. He was in the university’s blended program, where two classes were in-person, and two were online. Alex found the online classes to be enjoyable and easy to follow.

Alex worked part-time at Western Hills while he studied for his master’s. “They were good with my schooling coming first, which was great,” he says.

Alex credits his advanced degree with playing a role in what he does today. “If I didn’t have the master’s, I wouldn’t have been as successful at Western Hills. And that job set me on the path to where I am today. I’m a third-year athletic administrator now. I’m still learning, of course, but the degree’s opened doors and opportunities.”

Alex believes the Master of Science in Sport Administration role is essential if a person wants to work in college or high school athletics. “Initially, I thought I wanted to work at the college level,” says Alex. “The program caters to both interest areas, but high school AD work is more for me.”

Alex enjoyed the marketing and finance courses, the graduate assistant opportunities and interacting with other students and university faculty. “Going into it, I expected to get a degree. But what I didn’t know was that I would make such strong connections with other students and faculty, such as Dr. Kelley.” (Dr. David Kelley is the associate professor in the Sport Administration program.)

Alex says the athletic budgeting and finance and athletic revenue-generation courses taught by Dr. Kelley have been particularly helpful, since part of his job includes budget management. “Really, everything I learned in school, I still use today. I even list the classes on my resume, they’re that important — facilities management, risk management and social issues in sports, such as transgender student-athletes.”

Future Plans for this Athletic Director

As for what the future holds for Alex, he knows he wants to continue being a high school AD for the foreseeable future.

“My job is especially gratifying,” says Alex, “because high school and junior high are such critical times for kids. I help them develop the traits and characteristics that will see them through their lives.”

Alex calls this broader focus “education-based athletics.” He says the education part comes first, with athletics being an extension of the classroom. “Also, we don’t emphasize a win-at-all-cost mindset. We want to teach these kids so much more than just sports.”

Ready to Get Started?

Learn how a Master’s in Sport Administration combines your career with your love of sports.