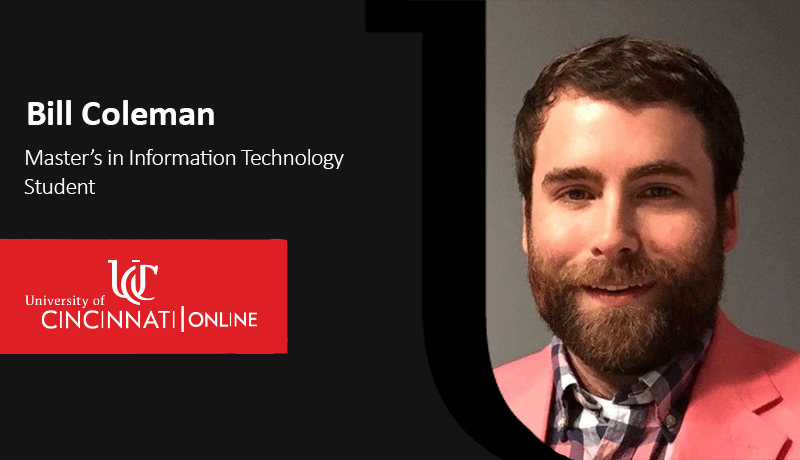 Bill Coleman, an Information Technology director for BIOTAP Medical in Louisville, knew he needed an undergraduate degree. “I was one of the only director-level employees who didn’t have a degree,” Bill says.

Bill was originally hired as a contractor for BIOTAP in 2015. Though he said the hiring manager was surprised he didn’t have a degree, it wasn’t a barrier when the company brought Bill on.

This isn’t the first time Bill considered the benefits of higher education. He started down the degree path in 2004, majoring in music and education. Then Bill began working for Apple and ended up dropping out of college. “It’s been a 10-year hiatus for me,” he says.

Eventually, Bill made his way back to college and graduated in August 2019 from University of Louisville with a Bachelor of Science in organizational leadership and a minor in music.

Shortly after he graduated, Bill got married. He gave himself time to adjust to married life and celebrating the achievement of his new bachelor’s degree. But soon, Bill began researching more education and certifications. “I was determined to keep growing professionally,” he says.

At BIOTAP, Bill is the primary IT person. It’s critical for him to stay abreast of emerging trends and medical industry-focused areas, such as complying with the Health Insurance Portability and Accountability Act, and understanding new technologies.

“I remember thinking — here, I have a college degree, but it has nothing to do with IT. My degree felt too ‘soft,’” Bill says.

Bill wanted to round out his academic resume and better position himself at work, so he researched several programs. He considered an IT-focused MBA and knew that whatever program he chose, it needed to be 100% online.

“When I found University of Cincinnati Online’s Master of Science in Informational Technology (MSIT) program, I narrowed my choices down to it and one other university,” Bill says.

Bill was drawn to UC Online (UCO) because of its strong reputation. He remembers doing a fair amount of reading about the MSIT program and working extensively with a UCO graduate advisor before making the commitment.

After talking with his wife about the opportunity before him, Bill chose UCO. He believed it would be the best program to support his career goals, covering the advanced IT technologies and practices he needed to know.

Bill started his MSIT studies at UCO in the summer of 2020. “I’d been working in IT for more than 12 years, so I only needed one bridge class to qualify — Introduction to Java,” he says.

Students applying for UCO’s online MSIT program may be required to take bridge courses if they have an undergraduate GPA of less than 3.0 or have no background in IT.

Bill worked with a professional resume writer to make sure he adequately captured the depth of his expertise. “If you can demonstrate knowledge of key areas, that’s taken into consideration. My experience helped me to skip three of the bridge courses,” Bill says.

Top-10 Master of Science in IT Degree

UCO’s MSIT degree, ranked tenth in the country by U.S. News & World Report, welcomes students from across the Cincinnati metropolitan area, Ohio, the U.S. and internationally, too.

Studying online for the MSIT degree, while students work full-time and juggle family and life demands, is a great option for our students. They get all the benefits of a traditional, on-campus degree, along with our educators’ and staff’s commitment to their success.

While Bill’s employer supports his focus on getting his master’s, he’s paying for UCO himself. Bill keeps work and school separate, doing the majority of his studying after-hours or on the weekend. “The online format is the only way I could do this,” he says. “Asynchronous learning is definitely for me.”

With Bill’s schedule at work and life outside of it, where music is still his passion, he makes time for his studies and works to beat deadlines instead of waiting until assignments are due. “Teachers post several weeks in advance, and I take advantage of that structure so I can remain ahead,” Bill says.

At UCO, Bill’s come to know dozens of IT professionals who are part of the MSIT degree program. “I met many people from the greater Cincinnati area,” he says, “and students from across the country and in India, too.”

Bill’s interest in getting to know his fellow students motivated him to set up a Discord community for them. The platform facilitates instant messaging and information-sharing ,fostering a feeling of connectedness.

“One of the things that I struggled with in my online undergrad studies was the lack of interaction and camaraderie with other students. Studying online, you miss out on in-person interactions and catching up in the hallways,” he says.

Bill knew that Discord could help bridge the face-to-face gap, and he’s happy to see many of the MSIT program students using it.

Seize the Opportunity for MSIT Degree

Bill’s decision to earn his master’s is reaffirmed continually, including when he applied what he learned in the cybersecurity class to his work at BIOTAP. He encourages others to do the same, making their dream of a master’s degree a reality. “If you’re far removed from the college experience, it can seem overwhelming to go back,” Bill says.

Bill believes that if IT professionals would take the initial step to explore online learning for an MSIT degree, they’d become excited about how it could fit their lifestyle and play a part in their professional success. “If you want to make a job change or make yourself more marketable in IT, an MSIT degree is a no-brainer,” says Bill.

As Bill continues his career at BIOTAP and his MSIT studies, he keeps his eye on the ultimate career goal to be a member of the C-Suite —a chief technology officer or chief information officer. “My master’s degree will underscore my value to my current employer and potential ones down the road,” Bill says. “I’m glad I’m on this path and am excited about my future