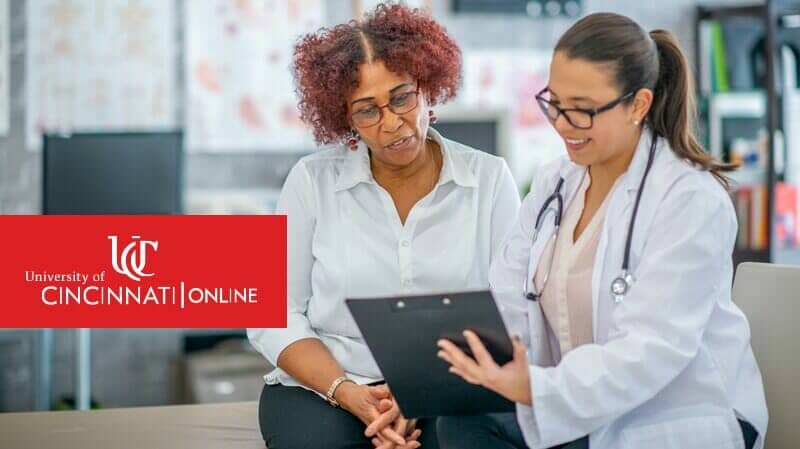 This latest recognition for the college caps the recent national announcement in which the college received the prestigious INSIGHT Into Diversity Health Professions Higher Education Excellence in Diversity award for its extensive recruitment efforts to increase the number of underrepresented and first-generation nursing students. Also receiving that award were the College of Allied Health Sciences and the James L. Winkle College of Pharmacy.

Inclusive excellence drives UC’s strategic plan, Next Lives Here, bridging each platform and pathway to the others.

“The history, consistency, quality and commitment to creating a climate for men who are nurses has been excellent,” says Brent MacWilliams, PhD, AAMN president, in a congratulatory letter to Greer Glazer, PhD, dean of the UC College of Nursing. “You can be very proud of your work and the work of your team.”

According to the AAMN, the purpose of the award is to recognize a nursing school or college that has provided significant efforts in recruiting and retaining men in nursing, in providing men a supportive educational environment and in educating faculty, students and the community about the contributions men have made and do make to the nursing profession.

Reviewers of the award application by the UC College of Nursing concluded that UC met or exceeded all areas of the evaluation, including recruitment activities, climate assessment, chapter activities, strategic planning and percent of male students admitted over the past three years.

“Diversity is just not enough,” says Glazer. “You can’t try to have an organization full of people with lots of differences if you don’t focus on inclusion. You have to focus on creating an environment where everybody, because of their differences, can thrive.”

In the College of Nursing undergraduate program, male admissions increased from 48 in 2016 to 63 in 2018. Graduate school admissions increased from 47 in 2016 to 81 in 2018. The six-year undergraduate graduation rate in the male student population was 91%, exceeding their female counterparts. Glazer said one of the reasons for those increases is due to the College being deliberate in attracting more male students.

“You have to be intentional about what you’re trying to do,” she says. “We have more men teaching in our undergraduate curriculum because I want our students to see role models.”

Helping You Build a Better Business Through Continuing Education
Employee recruitment and retention is crucial for the growth and profitability of an organization and should be a high priority for every business. At the University of Cincinnati Online, we want to help develop and retain your employees through our Business Partnership offering.
Learn More
Related Posts
A Message from Dean Greer Glazer
A Message from Dean Greer Glazer -  April 15, 2020 Dear UC College of Nursing Community, About a month ago, we saw our lives turn upside-down as we quickly adjusted to a new normal—one that seems to keep…
Read More
UC Outranks Top Schools in MSN Student Satisfaction
UC Outranks Top Schools in MSN Student Satisfaction Satisfaction among Master’s program graduates at the University of Cincinnati College of Nursing exceed those of graduates from some of the nation’s other top-ranked nursing schools, according to a comparative analysis of…
Read More